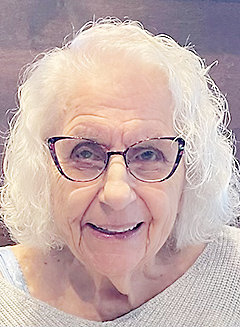 Funeral services for Mary J. Saul, 99, of Estherville, will be held at 10 a.m., today, Thursday, Sept. 22, 2022 at Grandview Baptist Church in Estherville with Pastor Adam Dragoon and Pastor Joel Sadler officiating. Interment will be at Swan Lake Township Cemetery. She passed away Friday, Sept. 16, 2022, at her daughters’ home in Virginia Beach, Va.

Visitation will be from 9-10 a.m., today at the church in Estherville.

She was raised in the Gruver area where she attended school and graduated from Maple Hill, Iowa, High School. Mary attended one year at Waldorf College and later attended summer school at Buena Vista College, before teaching school. In 1964, she earned her Bachelor of Arts Degree from Drake University in Des Moines, Iowa.

Mary was united in marriage to Clifford Saul on November 22, 1943, Farmington, Virginia. They made their home in Estherville, Iowa, where the couple raised their family. Mary taught elementary school in the Estherville School District for over 30 years before retiring. In her leisure time she enjoyed flower gardening, reading, quilting, history and traveling, taking trips to the Holy Land and to the 25th anniversary of D-Day. Cliff died April 1, 1997.

The family attended Immanuel Lutheran Church as the kids grew up. Mary was a Sunday school teacher and she and Cliff were Luther League leaders. They and the other leaders would plan for a lesson and then have a fun night. Fun nights were always very entertaining. They also had tobogganing parties at their home as well as taking the kids on camping trips. Many memories were made during those years.

After their kids were grown, they transferred their membership to Grandview Baptist Church, where Mary was a very active member, participating in church circles and Bible Study groups.

Preceding Mary in death were her husband, Clifford; her parents; brothers, William and Robert and sisters, Shirley Wright and Leona Drew.