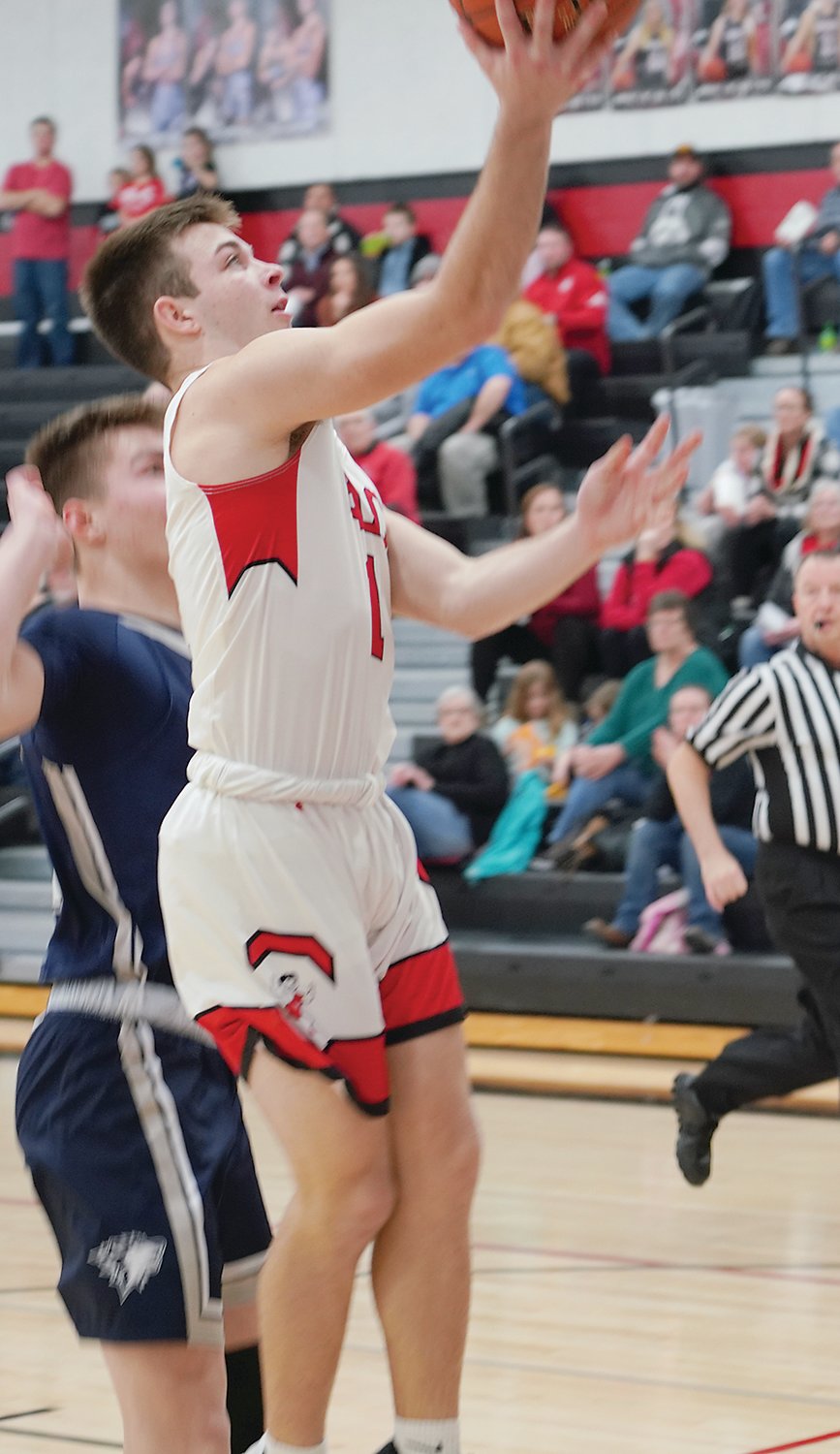 ELC senior Ryan Schiltz scored all 18 of his points in the second half against Western Christian, but the Wolfpack prevailed over the Midgets, 68-58, on Tuesday. Photo by David Swartz
Posted Thursday, January 20, 2022 12:00 am
By David Swartz - Managing Editor

HULL — As the team responsible for Class 2A No. 1 Western Christian’s only loss this season, the Estherville Lincoln Central boys knew the Wolfpack would be looking for revenge as the teams met up on Tuesday.

In the first meeting of the season on Dec. 7, ELC made 15 3-pointers—nine in the third quarter—to defeat Western Christian, 82-74, for the first time since 1986.

ELC needed a similar effort Tuesday, but injury and illness have taken a toll on the lineup with three players—Tristan Howard, Grant Love and Logan Nissen—unavailable for the rematch.

The Midgets took a good run at the Wolfpack. Down by 15 points, 52-37, entering the fourth quarter, ELC had consecutive 3-pointers from Ryan Schiltz, Blake Evans and Jack Jensen and two free throws from Owen Larson to cut the deficit to eight, 56-48.

However, that was as close as they would get, as Western Christian prevailed 68-58.

“We’re playing some good basketball and I’m very pleased with how we’re playing,” said ELC coach Nick Gruhlke. “Short three guys (from the first meeting), it could be easy to fold if you don’t have the character and toughness—we showed we have that.”

ELC started well against the Wolfpack. Owen Larson hit his first two 3-pointers and then assisted on a layup to Jack Jensen as the Midgets opened the game with an 8-0 run. Western Christian stormed back with a 15-4 run to lead 15-12. ELC’s Adrian Vaughn was fouled on a 3-point attempt right before the end of the quarter and he converted all three as the teams ended the first quarter tied at 15-15.

ELC didn’t fare as well in the second quarter as the Wolfpack threatened to run away with the game. The Midgets scored just seven points while Western Christian took a 35-22 lead into the locker room.

ELC did well to keep pace with the Wolfpack in the third quarter. Schiltz, who didn’t score in the first half, scored 11 of his team-high18 points in the third period to keep ELC within striking distance.

Larson finished with 14 points and Vaughn had five.

Warriors come up with big win over Eagles