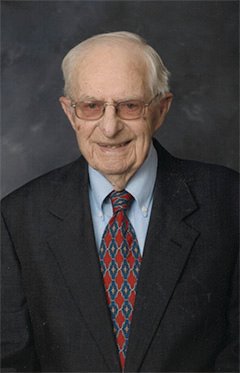 Nordein Orlando Peterson, was born on March 28, 1919, in a log cabin on the Peterson Homestead to Oscar Peterson and immigrant Bertha (Widme) Peterson. He passed away on January 2, 2022, at Good Samaritan Society in Estherville, Iowa at the age of 102 years. A funeral service for Nordein will be on Sunday, January 16, 2022 at 3PM at Wallingford Lutheran Church. A visitation will be held from 12:30 until the time of the service. Burial will take place at Wallingford Lutheran Cemetery with military honors by VFW Post 3388 and American Legion Post 91 of Estherville. Online condolences may be left for the family at www.henryolsonfuneral.com
Nordein attended country school one half mile from his home until 7th grade, then attended Wallingford schools until his junior year of high school. Senior year, he drove an old Chevy four door with no second gear and would pick up several neighbor kids on the way to school. He graduated from Estherville High School in 1937. The following fall he attended Waldorf College. After some hardships at home, the family couldn’t afford for him to go back to college the following year; so he stayed and helped his father farm and milk cows. In 1943 he was drafted into the US Army and was stationed at Ft Robinson, Nebraska. He was stationed stateside taking care of wounded American soldiers and German prisoners. As sergeant, he was honorably discharged in 1946. He returned home to help on the family farm. On January 26, 1947, he was united in marriage to Linda Mae Kristine Nielsen. The couple made their home in the Wallingford area. Nordein continued farming with his father until Oscar’s retirement in 1960. At that time Nordein and family moved to the 1861 family homestead. He was suddenly widowed in 1981 with the death of his wife. Nordein lived at the farm up until eight weeks before his death. He wore bib overalls nearly all his life as his work clothes.
Nordein was a lifetime member of the Wallingford Lutheran Church, where he served in leadership positions and was active in the church choir. He was a well-respected longtime board member of the Farm Bureau. Nordein’s Norwegian heritage was very important to him, and he was active in the Danish American Fellowship Society and the Emmet County Historical Society.
Nordein had a love for music and singing. He was a member of many different groups throughout his life including trumpet in high school and drum and bugle corps after his return from the war; the North 40; Many Voices Choir; and a church quartet. He would attend all his children’s musical events. Farming was Nordein’s passion; he was very involved in the NRCS and conservation of the land he farmed. He was baling hay until he was 95 years old and mowing his yard until he was 99 years old. He was also an avid woodsman and continued to operate the sawmill his father purchased in 1912. Nordein was a very generous and empathetic man, he was always there to help someone in need. Staying active into his late years was important to Nordein, he was the oldest member at the RWC Senior Fitness, attending until he was 99.
Left to cherish Nordein’s memory are his children: Paul (Joan) Peterson of Albia, Marcia (Joseph) Klingbeil of Estherville, and Rhonda (Martin) Hand of Mason City; his 11 grandchildren: Olaf (Teresa) Peterson, Sarah (Alan) Meyer, Kent (Shelley) Klingbeil, Kevin (Christa) Klingbeil, Collin (Hanna) Klingbeil, Kyle (Karie Villanueva) Klingbeil, Curtis (Jackie Imsande) Klingbeil, Aaron (Mindy) Hand, Kristina Hand, Melissa Hand, and David Hand; and his 13 great-grandchildren Joel, Ross, Brynn, Maren, Elsa, Drake, Stella, Grant, Knox, Kylah, Audrey, Abigail, and Fern. He is also survived by his sister-in-law Effie Nielsen, and special friends, Terry and Kelly Lundgren and family.
He was preceded in death by his parents, wife, two infant sons David and Nels, sister Selma Peterson, brother Donald (Beth) Peterson, his in-laws Thor (Helen) Nielsen, Bernard Nielsen, and Melvin (Rosa) Nielsen.
Henry Olson Funeral Home of Estherville is assisting the family with arrangements.