Lakers ‘On The Road Again’ 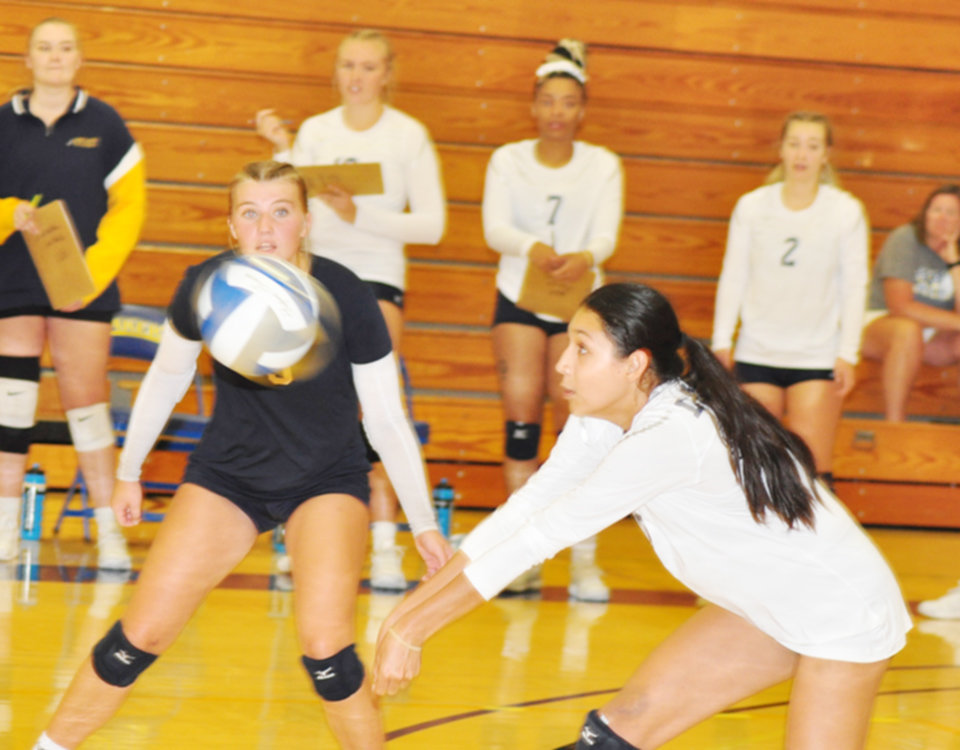 Iowa Lakes sophomore Dania Ponce Diaz of Estherville starts the offense with this pass in the Lakers’ match against Southeastern last Wednesday. The Lakers’ next home match is Sept. 29 when No. 12 DMACC comes to town.
Photo by David Swartz
Posted Wednesday, September 22, 2021 5:00 pm

WAHPETON, N.D. — The Iowa Lakes Volleyball Team hit the road again and headed to Wahpeton, N.D. to compete in the NDSCS Tournament this past weekend. The four and half hour trip turned into about eight hours. The Lakers spent an extra 4 hours along I-29 North awaiting emergency repairs on a blown bus tire. The Lakers arrived in time to play a 6 p.m. match versus UM-Morris JV and dropped the match 3-0 by scores of 25-17, 25-20 and 25-16.
The Lakers got their court legs back in the night cap and defeated Dakota County TC, 3-1 by scores of 25-23, 22-25, 25-21 and 25-15.
On Saturday the Lakers came out flat in the morning and lost to Bismarck State College 3-0 by scores of 25-15, 25-9, 25-14.
Iowa Lakes responded well in the second match versus a very good NDSCS squad but struggled closing out closely played sets, losing 3-0 by scores of 25-22, 25-22 and 25-23.
“The trip up there was definitely an adventure. On the court , still not happy with the up and down performances of individuals and as a team,” said Iowa Lakes coach Mike Turnbull. “We are still searching for consistency. This week will be another huge challenge. Wednesday we travel to play Iowa Central, who is currently 20-0 and ranked #1 in the country. On the weekend we will be at the NIACC Tournament for four matches and then turn around and travel to Minnesota West on Monday. So, after that 10-game road swing we will be back at home to play #12 ranked DMACC on Sept. 29. Nobody ever said JUCO (junior college) volleyball players are spoiled.”
LAKER STAT LEADERS [Tournament Totals]: KILLS: Jaden Gipfert 35, Rachel Breck 33 & Brooke Wright 26; BLOCKS: Breck 16, Katrina Fast 5 & Wright 4; DIGS: Dania Ponce-Diaz 54, Erin Hemphill 51 & Grace Kilian 40; SERVICE ACES: Breck 6, Kilian 4 & Fast 3; SET ASSISTS: Fast 101, Jacklyn Dean 15 & Ponce-Diaz 3
Laker lose tight match to Southeastern
After 14 straight matches on the road the Iowa Lakes Volleyball Team finally played a home match last Wednesday.
“Not to take anything away from last year’s cut-out fans but it was fun to see a tightly contested match in front of a raucous crowd,” said Iowa Lakes coach Mike Turnbull. “There was a great energy in the gym on and off the court.
The Lakers opened a lead early in the first set but visiting Southeastern steadied themselves and came away with a 25-22 win. After a second set, a resounding 25-13 win for Southeastern, the Lakers flipped the switch and won the third set 25-13. The fourth set went back and forth all the way through and the Blackhawks prevailed 25-23 to take the match 3-1.
“We fought a good fight tonight,” said Coach Turnbull. “Our kids did a great job of responding in sets 3 and 4. A few mistakes here and there were our downfall. It was never about effort— that was there all night. We still need to keep improving our execution offensively and defensively but we are getting there. We also want everyone to know how thankful we are to the fans that were at the game tonight. You people were great! The energy in the gym was fantastic.”
LAKER STAT LEADERS: KILLS: Jaden Gipfert 14, Rachel Breck & Jasmine Shriver 7; BLOCKS: Breck 4, Brooke Wright, Katrina Fast, Shriver & Gipfert 2; DIGS: Grace Kilian 21, Erin Hemphill 14, Kylie Kline 11; SERVICE ACES: Kline & Hemphill 2: Fast 4, SET ASSISTS: Fast 38

Lakers ‘On The Road Again’