Lady of the Americas 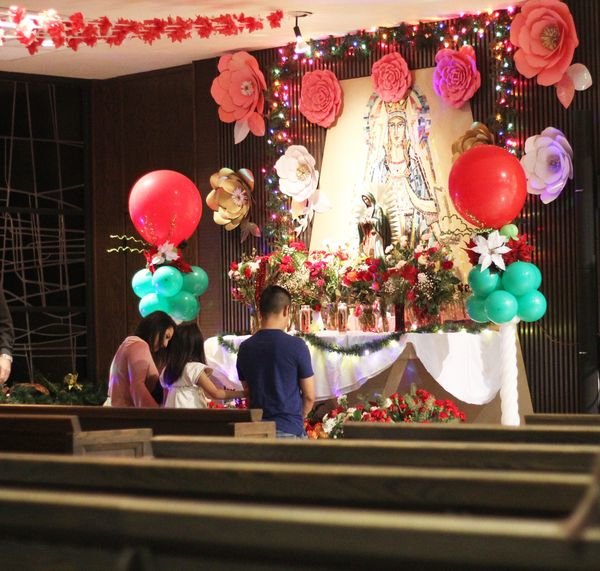 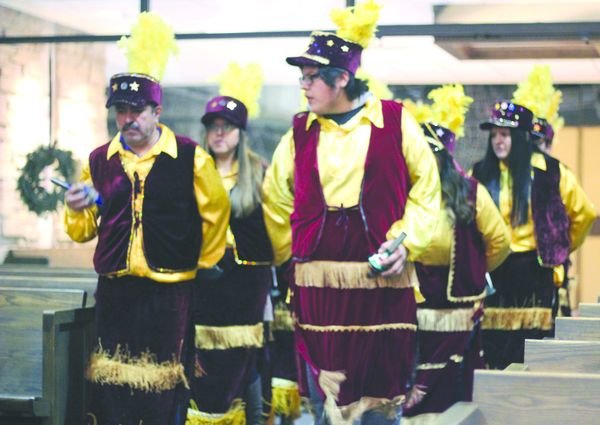 Parishioners at St. Patrick's Catholic Church held a rosary and mass in Spanish early Sunday morning to celebrate an event that cannot be explained, and is significant in the life of the church: the Feast Day of Our Lady of Guadalupe.

After singing songs during the 6 a.m. rosary, dancers, called "matachines," danced to the beat of a drum up and down the aisles of the church and continued in the vestibule afterward.

Young men and women dressed in gold satin shirts, "naguillas," which is like an ankle-length kilt, but slit all the way down from the hips, creating a front and back, and boots.

They hold brightly decorated shakers and rattles, and carry a second noisemaker shaped as a small bow and arrow.

When various explorers and voyagers "discovered" America, they discovered vibrant cultures bringing growth and change to life. In school, we may learn about the Aztecs, the Incas and the Mayans, and the stories we do learn may seem distant from human experience.

As the Reformation was beginning to heat up in Europe, in the Americas, a religious far was about to be sparked. On December 9, 1531, in the area of present day Mexico City, a young Aztec man named Juan Diego saw an apparition of Mary, the Mother of Jesus. Juan Diego said Mary, referred to as Our Lady, requested, in Juan Diego's native Nahuatl language, that a church to be built on that site, and Juan Diego relayed the message to the local bishop.

The bishop wanted to see some proof of identification, so Our Lady asked Juan Diego to gather roses that were suddenly growing on the hill. Roses were neither in season nor native to the area. Juan Diego took those to the bishop, wrapping them in his cloak for the journey.

The bishop opened the cloak, and within it, instead of roses, was an image of Mary. In the image, she wore the traditional garments of an Aztec princess. Spanish missionaries on hand at the time showed locals the imagery on the cloak, which they said told the truth of their faith.

A mass conversion of millions of Aztecs to Catholicism followed, and put an end to the human sacrifices the Aztecs were performing in an attempt to stop what they believed was the impending end of the world.

The church built on that Hill of Tepeyac is today the most visited Catholic pilgrimage shrine in the world. The original cloak or "tilma" is still there. There are scientists and art restorers who say the image is not painted by human hands, the image and fabric have remained in their original condition for nearly 500 years, though the weak fibers should have decomposed centuries ago. No identifiable paint or dye can be found on the image. The constellation map shown behind Mary holds the same constellations in the sky as on the day of her apparition. When examined with a microscope, the eyes on the image of Mary show the witnesses to the unveiling of the cloak: Juan Diego and the bishop.

One participant, who didn't want to be named for this article, said in addition to worshipping God through the miracle of Our Lady of Guadalupe, the celebration is a way to teach their U.S. born children more about their background. "Our children have the gift of being from both places. I want them to feel like they are from here and have Mexican roots. We can be one America," they said.