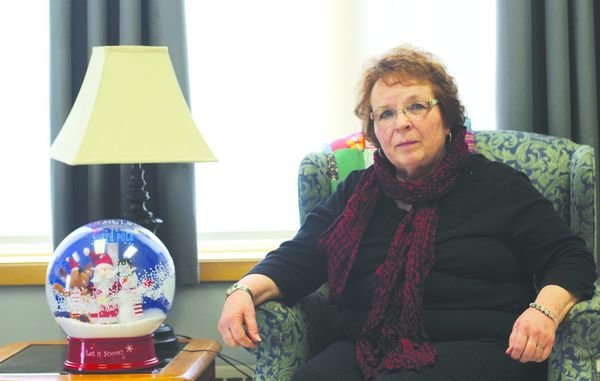 When Carole Thelen was hired as a Certified Nursing Assistant at Good Samaritan Center in 1981, Americans aged 85 and over made up just one percent of the U.S. population. Now older adults will reach nearly five percent of the population in 2020 and are expected to quadruple in number over the next four decades, according to the 2017 Profile of Older Americans.

While many other living situations now exist for older people, including assisted living and aging in place with care providers coming to the home, the number of long-term residents of nursing homes has remained stable.

Wan He, a U.S. Census Bureau demographer, said, "Increasingly, people are living longer and the older population itself is getting older."

Thelen's retirement last week was not something she broadcast, not even to her family.

"They knew I was thinking of retiring sometime soon, but I didn't tell them when," Thelen said. Nevertheless, at her retirement party Thursday afternoon, a bouquet showed up with a cards signed by all of her children.

Coworkers said over the years Thelen had hardly missed work.

"I was blessed with good health and with living close to Good Sam," Thelen said.

Living around the corner on North 15th Street allowed Thelen to venture out even in the worst weather, sometimes making her way down the middle of the street during snowstorms and blizzards to get to work.

When Medicare started covering patient therapies, Good Samaritan Center trained Thelen to become a therapy aide in its restorative therapy center. "We send a lot more people home these days, because they come in for a few weeks of therapy and then they're able to stay active," Thelen said.

"We can do wonderful things for short-and-long-term patients working with the physical therapists," Thelen said.

Thelen has seen many changes at Good Sam and in the way they care for residents over the years.

"The laws are stricter now, and I think that's good. Everyone is safer," Thelen said.

"People are living longer than they used to. I think it's because we serve them a proper diet, and doctors are more aware of regulating their medications so their general health is better," Thelen said.

Good Sam has had a remarkable rate of retention among some of the staff.

"We have seen nurses retire in recent years who were here for 40 years," Thelen said.

It's the friendships Thelen will miss the most, but she said living nearby means she will be able to volunteer and visit friends often.

"A lot of nice people work here. We became good friends and saw each other through getting married, having families, and now seeing our grandchildren grow," Thelen said.

One thing she won't miss: getting up at 4 a.m. to get to an early shift.