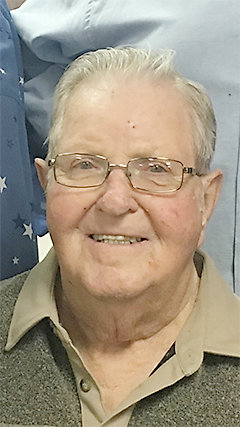 Funeral services for Wayne W. King, 86, of Estherville, will be held at 10:30 a.m., Saturday, Nov. 6, 2021, at the United Methodist Church in Estherville with Pastor Kevin Moore officiating. Interment will be at East Side Cemetery, Estherville with military rites by VFW Post 3388 and American Legion Post 91. On Monday, October 25, 2021, surrounded by his family at his home in Estherville, Iowa, God called him home at the age of 86 blessed years.
Visitation will be held from 5-7 p.m., Friday, Nov. 5, 2021, at the Henry-Olson Funeral Chapel, Estherville.
Wayne William King, the son of Joseph and Verna (Hamilton) King, was born on November 27, 1934, in Algona, Iowa.
Wayne received his education at Estherville High School, graduating in 1953. He then enlisted in the United States Army in 1957, where he served overseas in Korea and was honorably discharged in 1959. He later used his G.I. Bill to obtain his AA degree from Iowa Lakes Community College.
On June 19, 1960, in Little Cedar, Iowa Wayne married the love of his life, Mona Lea Cockrum. In December 1965 they welcomed home their baby girl, Holly and in June 1968 they welcomed home their baby son, Jay. Which made their small family complete.
While being a husband and a father, Wayne worked hard selling Life and Health Insurance and helped others as a realtor to find their perfect home, before retiring at the young age of 80 in 2014.
Wayne was a member of the United Methodist Church, a life member of the ELKS Lodge and the VFW, a past member of the Jaycees and Noon Kiwanis. Wayne had been a member of the Estherville Parks and Rec Board for 52 years. In 1997, he was honored by having a city park named after him.
In his free time, Wayne enjoyed playing golf and was a member of a bowling team for many years. His greatest joy was spending time with his wife, children, grandchildren, and great-grandchildren, who affectionately called him papa. He also had a love for country music, he was George Jones’ biggest fan and was a member of his fan club.
Wayne is survived by his wife of 61 years, Mona King; his children, Holly (Randy) Ouellette, Estherville, and Jay King, Trimont, Minnesota; three grandchildren, Alicia (Justin) Koppman, Estherville, Cara (Jacob) Dean, Scotland, South Dakota, Kristen (Ryan) O’Boyle, Oconomowoc, Wisconsin; 6 great-grandchildren Nevaeh, Levi, Brylea, Landri, Aleaya, and Ariyah. He is also survived by his sister Phyllis Fraser, Green Bay, WI; sister-in-law Joyce King; brother-in-law Terry (Shirley) Cockrum; and extended family John (Kathy) Klein.
Wayne is preceded in death by his parents, Joseph and Verna (Hamilton) King, siblings Dale King, Betty (Don) Kafer, and Gary (Judy) King; sister-in-law and brothers-in-law Kathy (Chuck) Mallow and Tom Fraser, as well as many other extended family and friends.
Online condolences may be left for the family at www.henryolsonfuneral.com.