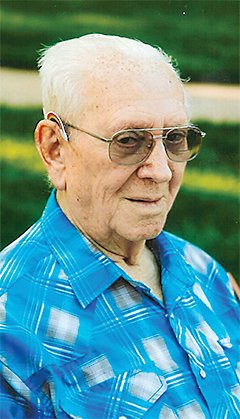 Funeral services for Wayne M. Petersen, 88, of Estherville, were held at 2 p.m., Saturday, Oct. 8, 2022, at the Henry-Olson Funeral Chapel in Estherville with Pastor Jesse Orttel officiating. Wayne passed away on Oct. 4, 2022, at his home in Estherville, Iowa after a short battle with leukemia.

Visitation was held Friday at the Henry-Olson Funeral Chapel in Estherville.

Wayne M. Petersen was born on a farmstead southwest of Graettinger, Iowa to Henry J. and Grace M. (Bauman) Petersen on August 7, 1934. Wayne attended a country school through the seventh grade and graduated from Graettinger High School in 1953. He was the husband of Vivian D. Dahl. The couple had just celebrated 66 years together on Sept. 6. Both  attended the Good News Community Church in Estherville.

Following his graduation, Wayne worked in Estherville at the Northern Lumber Company, DIX Bottling Company (Pepsi-Cola) and Swanson’s, which was later known as Hy-Vee. Wayne also worked at John Morrell for 25 years in Estherville and 12 years at Northern Iowa Die Casting in Lake Park, Iowa. After being retired for a while, Wayne went back to work part-time for Rides Bus of Spencer, Iowa. He enjoyed providing rides to individuals with disabilities for the next 14 years. His service earned him the award of “Driver of the Year.”

Wayne also served on the Board of Directors for the Emmet County Historical Society. He enjoyed working at the museum and sharing his knowledge of the history of Emmet County. Some of Wayne’s favorite memories include helping his dad in the fields by driving the 1020 tractor and singing “Onward Christian Soldiers” every week during Sunday School. Wayne also enjoyed woodworking, car races and going to the Clay County Fair.

Wayne will be remembered for being his caring, witty and Dr. Pepper drinking self. He loved when his family would gather together for the holidays. All of these times will remain special to his family as they remember the love in his eyes and the smile on his face as he told his jokes and stories.

He was preceded in death by his parents; his brother, Donald M. Petersen; sister, Betty M. Swalve; sisters-in-law, brothers-in-law and a great-grandson.