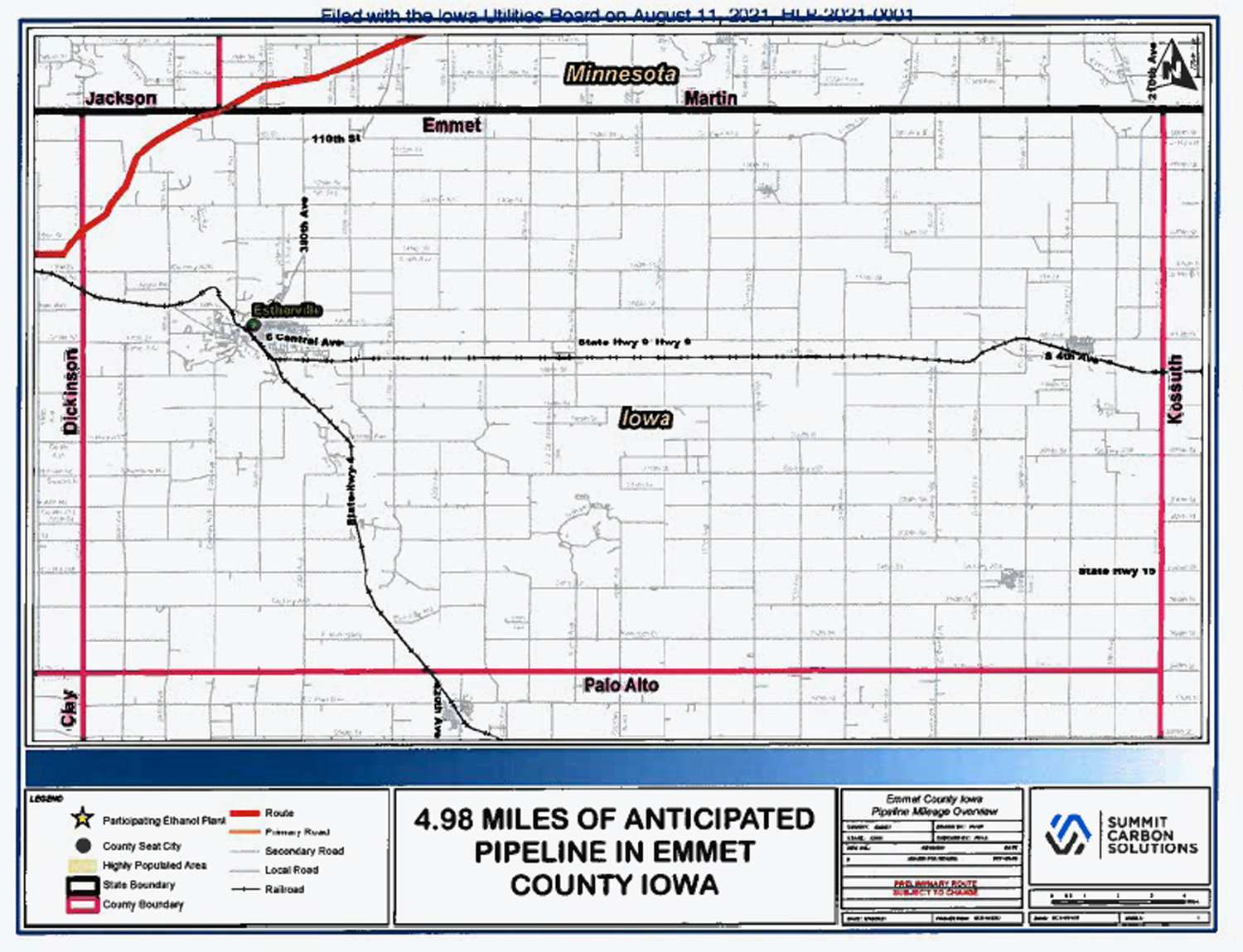 Opponents of the Summit and Heartland Greenway CO2 pipelines began a series of demonstrations at the Iowa State Capitol between each Monday between 12-1 p.m. to hold signs and hand out information on why they oppose the construction of CO2 pipelines around the state.
Summit Carbon Solutions is an Ames Company that was granted a permit Jan. 25 to construct a carbon dioxide pipeline. Summit’s pipeline project is called the Midwest Carbon Express. In Emmet County, the pipeline is five miles long, crossing from Dickinson County into the northwest corner of Emmet County and into Minnesota at the Jackson/Martin county line.
Summit reported the land value for each county its pipeline would cross. Emmet County was estimated at $130 per CSR2 (Corn Stability Rating) point per acre. This compares with nearby counties: Dickinson $135, Kossuth, $135, Clay $140, Palo Alto $135.
Summit’s example of how the value is used, as submitted on the list of land values on the Iowa Utilities Board docket: “[if] Summit needs 5 acres on a farm with a CSR2 score of 70, the fair market value would be $120 (dollars per point) x 75 (CSR2 score) x 5(acres) = $45,000 fair market value for the land where the easement is sought, if it were sold in fee.”
On the Summit project, several Emmet County landowners submitted comments to the Iowa Utilities Board.
Luann Mart of Estherville stated, “I oppose the installation of the Summit Carbon Solutions pipeline across Iowa. Keep us safe by not installing this pipeline.”
Lori Smith of Estherville cited several reasons for what she called her blatant opposition to the Summit pipeline. “My reasons are the unrepairable land damage, damage to drainage systems that will cost millions of dollars to repair along the route (and should be paid by Summit and navigator), risk to humans and animals in the case of pipe breach as did happen in Satartia, MS in 2020, and devaluation of property affected. I have interest in property potentially affected in both the Summit and Navigator projects because I received notice by both companies. What’s the odds of that when I have interest in only 550 acres, 200 acres in the Summit area and 350 acres in the Navigator area?”
Joby Harvey called the pipeline a threat to his family’s Emmet County land.
“We have a family farm in Emmet County that has been productive land for 60 years and now it’s threatened by a pipeline that carries hazardous material that only benefits private companies. I think we should have the right to allow what is coming onto OUR land, not to have eminent domain threatened upon us.”
Harvey added that he attended the informational meeting in Estherville and that his observation was that there was no one in favor of the pipeline other than attendees from Navigator and the manager from Valero Ethanol Plant.
“A neighbor and close family friend had a very good point that night. Navigator & Summit are trying to capture the carbon from the ethanol plants, but they are sending hundreds & hundreds of heavy equipment, semi trucks & pickups, not to mention the manufacturing plant to produce the pipe that pollutes more than what that pipeline will capture for years and years.”
Harvey addressed the three members of the Iowa Utilities Board directly:
I suggest that you read every single one of these Iowans’ comments on this nonsense pipeline that is running through family farms and small-town communities. You three have the final vote to shutting down this pipeline that nobody wants in Iowa.”
The Iowa Utilities Board did receive a few notes of support for the Summit pipeline. Pipeliners Union 798 United Association sent a letter from its business manager Danny Hendrix with 2,039 signatures.
“…increasing the nation’s carbon capture and storage capacity is necessary to reach current emission reduction targets, and they understand the significant economic benefits this project will bring to the local, state, and regional economies,” the letter stated in part.
Richard Stern, administrator of the Teamsters National Pipeline Management Cooperation Trust, also submitted a letter of support, citing reasons that include the fact that its members hunt and fish in Iowa and value protecting the land and environment, and the fact that many Teamsters pipeline workers are veterans.
“We support the building of this project provided Teamster Union represented contractors are awarded the work,” Stern’s letter stated.
Former governor and U.S. Ambassador to China Terry Branstad sent a letter on Summit Carbon Solutions letterhead to landowners citing his advocacy of the rights of Iowans for over 40 years. Branstad was named senior policy advisor for Summit in March.
Branstad stated in his letter, “I strongly support Summit Carbon Solutions and the proposed pipeline project, because it will significantly improve the markets for Iowa ethanol, help encourage higher prices for corn, and make your Iowa farmland more valuable.”
Branstad appointed two of the three members of the Iowa Utilities Board, including Richard Lozier. Lozier’s term runs through April 30, 2023. He was appointed May 1, 2017, and currently serves on Governor Reynolds’ task force on CO2 pipelines.
Landowners have asked that either Branstad should resign from his advisory position at Summit, or the two IUB members Branstad appointed should recuse themselves from deciding Summit’s application.
In addition to the $4.5 billion value of the pipeline, at stake are the federal tax incentives that have fueled the rush to build the pipelines.

Sathoff outlines pros and cons of being runoff city

Anderson signing with ISU is a community event

Jiu Jitsu may be one way to prevent assault