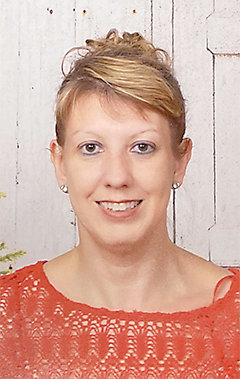 Mary Ann (Kaess) Ellsworth, 48, passed away on December 27, 2021, at Methodist Hospital in Rochester, after a 34-year battle with cancer.
Mary Ann was born September 16, 1973, in Fridley, MN, the eldest of seven children to Margaret “Peg” (Eiselt) and Jerome “Jerry” Kaess. She lived in South Minneapolis until 1987, when she moved with her family to Estherville, IA.
In 1988, at the age of 14, she was diagnosed with osteosarcoma and began treatment, traveling back and forth to the University of Minnesota Hospital for surgeries and intense chemotherapy. She graduated from Estherville High School in 1992 and enrolled at Minnesota State University, Mankato. In June 1997, she graduated summa cum laude with a Bachelor of Arts in piano performance.
She then decided on a career change, returned to MSU, and earned an elementary education degree in 2000.
Unfortunately, her childhood cancer resurfaced several times over the years. While working her way through college, she continued to battle osteosarcoma when it traveled from her leg to her lungs. She taught second grade in Palm Springs for a year before returning to Minnesota.
She married James Best in 2002. Together they had two children, Haley and Connor. Eventually, the family settled in Byron, MN. Mary and Jim later separated.
Mary poured herself into motherhood. She was gifted and creative, with the ability to create a multitude of projects from her vision and imagination. She painted, sewed, embroidered, decorated projects from her original designs. Haley and Connor could have just about any Halloween costume or birthday cake they could dream up.
She also found time to channel her ambitions into other areas. She wrote three books. She earned a master’s degree in special education. Near the end of her life, she worked as a special education teacher with Rochester Public Schools, while also giving private piano lessons.
Throughout the years, she endured over 40 major surgeries.
She was diagnosed with a separate type of cancer in 2013, triple negative breast cancer.
In 2016, Mary received shattering news: the breast cancer had metastasized with tumors in her brain and other areas of the body. After multiple treatments and keeping the worst of it at bay for almost five years, she felt she had a real chance to see both her children graduate from high school.
Mary Ann is survived by her beloved children, Haley Best, 18, and Connor Best, 16, of Byron, MN; her mother, Peg of Bettendorf, IA. She’s also survived by her six brothers and sisters, along with her in-laws, nieces and nephews: Joseph and Jana Kaess and their children, Alex and Tyler of Andover, MN; Kathy and Dan Pulido and their children Cael and Kylie of Atlantic, IA; Carrie and Chad Breuer and their children Lance, Nick, Levi, and Emma of Bettendorf, IA; Drs. Michelle and Jason Wachtl and their children Ava and Addie of Plymouth, MN; Drs. Christine and Brian Albery and their children Brady, Julian, and Layla of Bettendorf, IA; Jerome “Jay” and Liz Kaess and their daughter Olivia of Bettendorf, IA; and dear friends, Jodi Kvaas Rogstad and Laurie Cook. She’s also survived by many aunts, uncles, cousins and friends.
She was preceded in death by her father, Jerome Kaess on January 27, 2021; her paternal grandparents Romen Albert and Lucy Belle Kaess; her maternal grandparents Dr. Robert Otto and Margaret Madonna Eiselt; an aunt, Mary Lu Kaess; and two uncles, James Wetzeler and Robert Wolff.
A celebration of life for Mary will be held in the spring in Spirit Lake, IA. Memorials may be directed to the family.