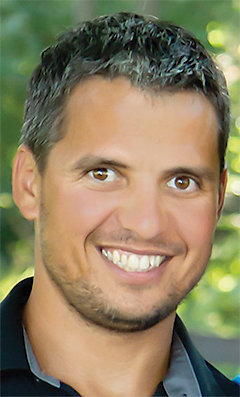 Funeral services for Kevin Klingbeil, 37, of Estherville, will be held at 10:30 a.m., Saturday, August 27th, 2022, at St. Patrick’s Catholic Church in Estherville with Father Kelly officiating. Interment will be at the Wallingford Lutheran Cemetery, with lunch to follow at the Duhigg Center in Estherville. Kevin passed away peacefully after a three year battle with cancer surrounded by his family in his home on August 20th, 2022.

Visitation will be Friday, August 26th, 2022, from 4-7 p.m. at the Henry-Olson Funeral Home in Estherville.

Kevin August Klingbeil, son of Joseph and Marcia Klingbeil, was born March 31st, 1985. Kevin grew up on a farm north of Gruver, was a baptized and confirmed member of the Wallingford Lutheran Church and graduated from Estherville Lincoln Central High School in 2003. He was active in wrestling and FFA early on, worked various construction jobs and drove anything with an engine. By 18, he obtained his commercial driver’s license. Kevin’s best friend Matt Pelzer, who was like a brother, introduced him to waterskiing using the family boat on Swan Lake.

After high school, Kevin attended Iowa Lakes Community College and transferred to Iowa State University. A semester before graduation, Kevin took a leave of absence to attend McCormick’s Ski School in Seffner, Florida; there he mastered his skills to “ski all three” (slalom, trick and jump) competition events. He eventually returned to Iowa State, where he obtained a bachelor’s degree in Agricultural Engineering in 2009.

Following college, Kevin settled in the Des Moines area, where he became a Senior Engineer for the John Deere Intelligent Solutions Group. Kevin’s work provided the opportunity to travel both locally and abroad, including California, northern Canada and Brazil.

Kevin met the love of his life, Christa Clayton, at a local bar after offering to buy her a drink. Following a period of dating / vetting, Kevin proposed with grandeur after transcribing “will you marry me?” on a 75-acre family farm using a soil finisher and GPS mapping, flying over the proposal in a four passenger plane. On June 7th, 2014, Kevin and Christa were united in marriage at St. Patrick’s Catholic Church in Estherville. The couple moved back to their roots in Emmet County in 2016. Together, they grew their family with two children Knox and Kylah.

Kevin was the life of the party, both because he was a night owl and because he had a talent for sparking conversation with people. He had an opinion for every topic, but was also knowledgeable. People naturally gravitated to Kevin. He was known for lending a helping hand, whether you asked for it or not. And if he didn’t know how to help, he would research until he did.

Kevin was passionate about farming. He was there to help his dad each year, growing corn and soybeans. Together they spent many long nights out in the shop working on machinery and talking about life’s mysteries. Kevin had a knack for fixing things, which as an engineer, turns into an endless list of projects. He rebuilt the engine in his truck, dug a ski lake, restored multiple cars, remodeled his homes, and built and surveyed waterski courses.

Aside from family and farming, waterskiing was Kevin’s true passion. He competed at the regional and national level, earning many accolades, including the Athlete of the Year Award at the Iowa Games in 2019. Kevin was a senior driver and senior judge at ski competitions, had a promo boat, and served as president for the Iowa State Waterski Club and Iowa Waterski Association. He also co-founded a waterski club at his lake house on Diamondhead Lake. And as much as Kevin loved to ski, he loved to coach others even more. Kevin volunteered at various youth clinics for both abled and disabled children and has taught countless others how to waterski.

Whether it was driving his diesel pickup across county blacktops of rural America, working farm ground from dusk to dawn, holding hands with his wife, helping a stranger change a flat tire, or doing an opening slalom set at 34mph at 22 feet off, Kevin put his heart in everything he did. Kevin managed to fit a lot of life in his short time here on Earth, often saying, “sleep is overrated.”

Left to cherish Kevin’s memory are his wife Christa, his children Knox and Kylah, his parents Joseph and Marcia, his brothers Kent (Shelley), Collin (Hanna), Kyle and Curtis; and his best friend Matt (Ashley) Pelzer. He is also survived by his nephews and niece Drake, Stella, Grant, and Isaac; his father- and mother-in-law Steve and Sandy Clayton, his sister- and brother-in-law Sarah and Joe, his uncle and aunts, Paul (Joan) Peterson, Rhonda (Martin) Hand, and Marcia (Ron) Sinn; as well as many extended family members.

Kevin is preceded in death by his grandparents Nordein and Linda Peterson, and August and Della Klingbeil.

In lieu of flowers, memorials may be sent to the Henry-Olson Funeral Home in Estherville, in care of Christa Klingbeil.

Finally, the family asks that in honor of Kevin’s life, you follow the golden rules of water skiing: keep your arms straight, your knees bent and don’t let go (until it’s time). Kevin would say, “You need to spend more time on the water.”