Mike Jensen (looking at camera) and brother Randy Jensen (Iowa t-shirt) were selected honorary captains for the University of Iowa at the Citrus Bowl this past Saturday in Orlando, Fla. Photo submitted 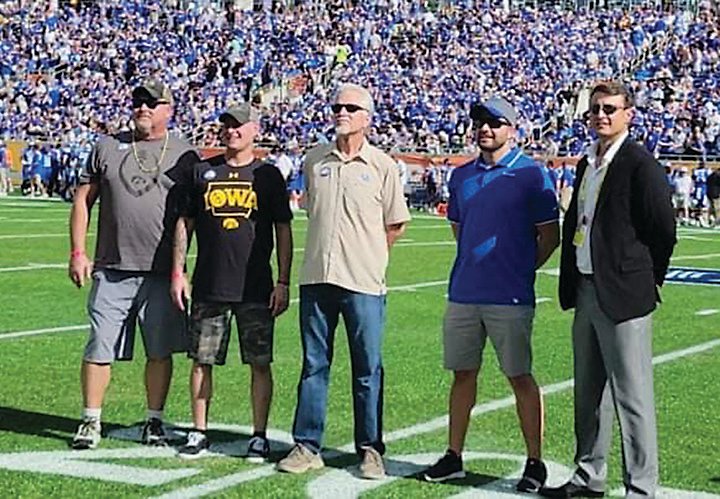 Mike Jensen and Randy Jensen, left, along with the honorary captain from Kentucky (center) were introduced to the Citrus Bowl crowd during the first TV timeout. Photo submitted
Previous Next
Posted Friday, January 7, 2022 12:00 am
By David Swartz - Managing Editor

ORLANDO, Fla. — Two Emmet County natives were honored at the 2022 Citrus Bowl in Orlando, Fla, this past weekend.
Brothers Mike Jensen and Randy Jensen were named honorary captains for the University of Iowa Football Team and took part in the coin flip prior to the start of the Jan. 1 game with the University of Kentucky.
Both veterans, Mike joined the U.S. Army directly out of high school in 1986. Randy enlisted in the Army Reserves in 1990. Both graduated from Lincoln Central High School in Gruver—Mike in 1986 and Randy in 1988.
The two brothers were selected by the Citrus Bowl organizers— Florida Citrus Sports—to be honorary captains.
Mike lives in Orlando and one of the committee members knew him and that he was a veteran and from Iowa.
When asked to be an honorary captain, Mike suggested his brother Randy. The organizers decided that both brothers could serve as honorary captains.
“Mike and I just happened to be in the right spot,” said Randy.
The experience was one to remember.
“It was a great experience for me,” said Randy. “We got the red-carpet treatment.”
“It’s a good story—two farm boys from Iowa,” Mike said, adding that the crowd was about “75 percent” Iowa Hawkeye fans.
The two brothers joined the Hawkeye captains at the 50-yard line for the coin flip. The University of Kentucky also had an honorary captain, a Vietnam veteran.
Iowa Head Coach Kirk Ferentz stepped out, shook both their hands and thanked them for their service.
The Jensens and the honorary captain from Kentucky were all recognized at the first television timeout to the stadium crowd.
“The crowd really notched it up for that,” said Randy.
Mike’s enlistment included being selected to be a West Point candidate, and he went to West Point prep school where he was a walk-on football player. He graduated from West Point in 1992. He served six years as an artillery officer and also was deployed to Haiti, serving a total of 12 years.
Randy, who currently lives in Cedar Falls, served in Desert Shield Storm soon after he enlisted. He also attended the University of Northern Iowa and was commissioned as a military police officer.
He spent the bulk of his 21-year career with the 4249th Military Police Detachment/415th MP Detachment of Pocahontas and retired after a deployment to Afghanistan.
“They (Florida Citrus Sports) do a good job of honoring veterans,” said Mike. “It was a good experience.”