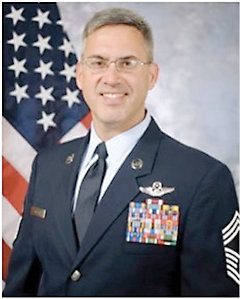 Jeffrey Richard Sidles, 55, passed away unexpectedly on Wednesday, November 24, 2021 at his home in Wichita, KS.
Son of Richard and Sandra (Kinnard) Sidles, he was born on December 22, 1965 in Des Moines, IA and raised in Estherville, IA. He graduated from Estherville High School in 1984 and married his high school sweetheart Lisa Breiner in August of 1986. They have two children, Ashley and Alexandar.
Jeff joined the United States Air Force in 1985 for a career spanning over 29 years, achieving the highest enlisted rank possible—Chief Master Sergeant. His roles as both a KC-135 and KC-10 boom operator spanned virtually every aspect of global mobility operations in support of national defense in both peacetime and combat operations. He completed a diverse and distinguished flying career with well-over 5,000 flight hours in three different major weapon systems. He and his family became world travelers, first stationed at Grand Forks AFB, ND, followed by Barksdale AFB, LA, Maguire AFB, NJ, across the pond to Ramstein AB, Germany (Brats and Bischoff, anyone?), then on to the great plains of Altus, OK, where he was part of an elite cadre teaching in-flight refueling with KC-135s. He was grateful for Oklahoma’s lack of grass because he sure didn’t like mowing the lawn! Next came HQ AMC at Scott AFB, IL, Offutt AFB, NE, then back to Grand Forks AFB, ND. Late in his career he transitioned to a senior leadership role in the Intelligence Surveillance & Reconnaissance community supporting global surveillance missions in combat operations at Creech AFB, NV. He retired in 2014. In retirement, he continued to serve his country in a global mobility capacity as an initial cadre contract instructor for the Air Force’s newly-acquired KC-46 tanker. He was recognized by students, peers, and management as top in his craft.*
Somewhere in the middle of these career-braiding tours Jeff received a Bachelor’s of Applied Science from Wayland Baptist University in 2003 and a Master’s of Public Administration from the University of Oklahoma in 2011.
Jeff (aka Sides, Cornbread, and Grumpy Grampa) was a passionate and devoted family man. He was kind, patient, inspirational, and funny (seriously, the guy was a side-splitter). To say he was clever is an understatement. He could quote any movie at the drop of the hat. Sharing humor from his vast cinematic archive was his love language. He loved grilling and cooking—man of a thousand hot sauces!—as well as films of all types, especially documentaries and anything goofy. As a boy he was consumed with his prized Hot Wheels collection, a love that evolved into a (mild) obsession with truck and motorcycle shopping. He was a cherished husband, father, brother, and son; an adored grandpa and uncle; a loyal and dependable mentor and friend. We are all better people for having had him in our lives.
Jeff is survived by his loving wife of 35 years, Lisa; mother Sandra Sidles of Arnolds Park, IA; sister Sara Vogelaar (Michael); daughter Ashley Bauer of Denver, CO; son Alexandar Sidles (Chaalse) of Grand Forks, ND; grandchildren Gavin Bauer, Vada and Idella Sidles; eight nieces and a nephew; aunts, uncles, and cousins, and countless others who were lucky enough to be a part of his story. We will all mourn your passing and remember you as the great man you were. Boom stowed and latched.
He was preceded in death by his father Lester Richard Sidles and his much-loved grandparents, Bill and Audine Kinnard and Lester and Erna Sidles.
A military honors memorial service was held Tuesday, November 30, 2021 at 1:00 PM at Lakeview Funeral Home and Cemetery in Wichita, KS.
Condolences may be left at jeffsidles.org. The family welcomes donations to the Alzheimer’s Foundation of America as an expression of sympathy and in memory of his late father.
*NKAWTG = Nobody Kicks Ass Without Tanker Gas