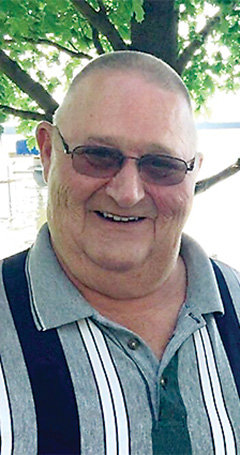 Visitation for Herman Cooklin, Jr., 79, of Estherville will be held from 4-7p.m., Friday, October 21, 2022, at the Henry-Olson Funeral Chapel in Estherville. Family asks that you come as you are or wear racing attire.

Hermie, as he was known, received his education in the Estherville school system. With permission from his Mom, he enlisted in the United States Army and served in the Vietnam War. After his military service he returned to Estherville where he made his home. In his younger years he lived life to the fullest by raising a little hell and always having a good time.

Hermie joined his brothers and worked in road construction, which he greatly enjoyed. But most of his life and true passion was behind the wheel; whether it be his semi, a bus, road grader and at one time a race car—this is where he was happiest. He was the best there was and that’s how he got to drive the boss’ truck; eventually becoming an owner operator of two semis. Throughout his career he received the award of Owner Operator of the Year. But his greatest joy was being able to have his sons go down the road with him.

Over the years Hermie enjoyed tinkering around in his garage, watching western movies, Nascar and WWF Wrestling along with going camping. But his favorite thing to do was going racing! Hermie loved to hit the dirt tracks with his kids and friends especially when he could take his bus. They traveled to tracks in Webster City, Knoxville, Jackson, MN, Kansas City, Daytona and Talladega just to name a few.

Hermie had the best sense of humor which had us all laughing over the years. But he will be remembered more for his huge heart and generosity, always helping a friend in need. He will be dearly missed by many.

Left to cherish his memory are his children: Mike Cooklin of Bloomington, MN; Chris Cooklin of Harrisburg, SD and Jeff Cooklin of Estherville, IA; grandchildren Ashley Cooklin, Brandon Cooklin and Reese Radcliffe, great grandchildren Jacob, Ally and Lexi, several nieces and nephews along with sisters-in-law. A special thanks to his longtime friend Ernie who was there for it all.

Preceding him in death are his parents, his only sister Delilah, brothers Bert, Marvin, Max and Dale. Many of his friends were already up there waiting at the track for him.

Online condolences can be left for Hermie’s family at HenryOlsonFuneral.com