Estherville’s Power is in experienced hands 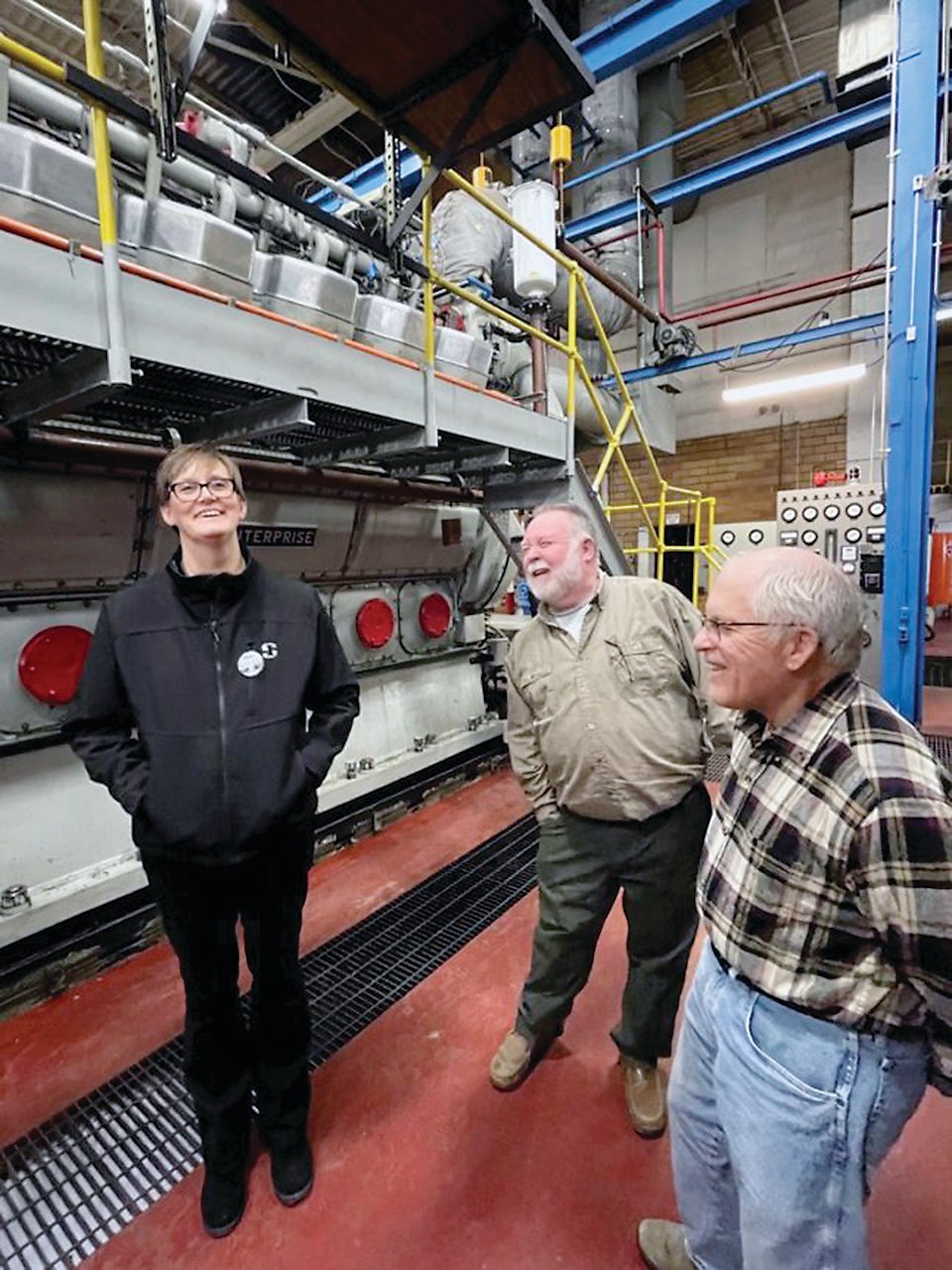 Bret Mace took city council members on a tour of Estherville’s electric production facility at Monday evening’s council meeting. By the end of the tour, city council member Brandon Carlin said, “As impressive as the equipment is, I’m just as impressed with the knowledge of the people working there.” Mace is foreman of the electrical production department. Brad Friesner, electric utility superintendent, and operator Dale Bradley also led the facility tour.
Mace said the city of Estherville has five generation units: Engine #2, Nordberg, is used only in an emergency situation. It does not meet EPA ruling on emissions. The remaining four engines: #3 Cooper (4.200 HP, 3,000 kw), #4 Enterprise (5,574 HP, 3,500 kw), #5 Enterprise (5,574 HP, 3,500 kw), and #7 Cooper (4,200 HP, 3,000 kw) run at 80% capacity due to the age of the units. The units range in origination from 1960 to the “baby” at 1969. At the 80% mark, the plant can produce 13 megawatts.
Mace said, “In the event of a complete power failure from our supplier, the plant has a standby generator to the power plant. This power allows us to operate the lights and equipment necessary to start the plant. The standby generator is a 75 kilowatt generator the city purchased from Hicklin Power Co. of Des Moines. That generator is operated by a John Deere motor.”
The five largest consumers of the city’s electric power are Estherville Foods, Avera Holy Family Hospital, the Wastewater Treatment Plant, Hy-Vee, and ELC Middle School.
In the last decade, the electric production department has completed several major maintenance projects, including an overhaul of the #4 Enterprise engine last year, removing the heads and installing new gaskets and upper liner seals on Coopers #3 and #7 in 2015, installing catalysts on engines, 3, 4, 5 & 7 in 2014 and an engine overhaul on #5 Enterprise in 2010,
Estherville elected to establish a power plant in 1894. In 1896, the city purchased a Buckeye engine and two boilers. Various replacements came in during the 1930s through the 1960s.
For the summer of 2021, the peak usage was on July 27 at 5 p.m. The high temperature that day was 93 degrees. The daily peak over the winter of 2021 was on Feb. 15 at 7 p.m. For the fiscal year July 1, 2020-June 30, 2021, the total system power purchase was 58,366,692 kilowatt hours.

Sathoff outlines pros and cons of being runoff city

Anderson signing with ISU is a community event

Jiu Jitsu may be one way to prevent assault