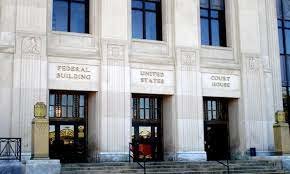 Last week, the civil case against the city of Estherville, Employees Credit Union and individual police officers and a credit union employee, based on a petition filed by local woman Victoria Abrahamson, moved to federal court. Several of the defendants filed their answers in response to Abrahamson’s complaints that former officer Ben Scheevel abused his authority as a law enforcement officer, and police chief Brent Shatto failed to address Scheevel’s violations, that Employees Credit Union set off the events in impounding Abrahamson’s vehicle, and the city of Estherville violated Abrahamson’s rights by not overseeing Scheevel and Shatto as city employees.

The events of the case happened in April 2019, as previously reported by the Estherville News.

Scheevel filed a 24-page Answer in the case May 4, requesting that the petition be dismissed with all costs assessed to Abrahamson.

In his Answer, Scheevel denies that he was acting in his capacity as an Estherville police officer when he assisted in repossessing the vehicle. Scheevel admitted he offered help to Abrahamson to recover her vehicle, but denies abusing his power as a law enforcement officer or harassing Abrahamson. Scheevel states in his answer that he specifically denies performing any of the conduct of which Abrahamson complains in her petition in his capacity as a law enforcement officer. Scheevel admits he sent messages to Abrahamson, but denies any of the threats or bribes she alleged.

In his defense, Scheevel states Abrahamson’s petition fails to state a claim on which relief may be granted, that Abrahamson cannot recover damages due to the doctrine of “unclean hands,” that Scheevel is entitled to qualified immunity, and that Abrahamson is unable to recover monetary damages by the doctrine of “in pari delicto,” or “in equal fault.” Scheevel is represented by Estherville attorney Matthew T.E. Early.

The Estherville Police Department, represented by attorneys Doug Phillips and Zach Clausen of Sioux City, made a motion to dismiss the case against EPD, stating the Department is “nothing more than a subdivision of the government and not a legal entity separate and distinct from the city of Estherville,” and therefore should be dismissed from the suit because it’s not a proper party to the court action.

Chief Shatto and the city of Estherville answered Abrahamson’s petition with an answer and jury demand.

The city and Chief Shatto denied all of the claims in Abrahamson’s petition except portions of the points that agree to details such as Shatto being chief of police and Abrahamson’s mother, Kylie, speaking to Chief Shatto at the time of the incidents in the case.

The city of Estherville stated its defenses were that Abrahamson fails to state a claim for relief, that Chief Shatto is entitled to qualified immunity with respect to the allegations that Chief Shatto denied Abrahamson her civil rights, that Scheevel was acting outside his scope as police officer and his employment with the city in his action, and that the city is entitled to immunity, and additionally that Abrahamson did not file her claim in time.