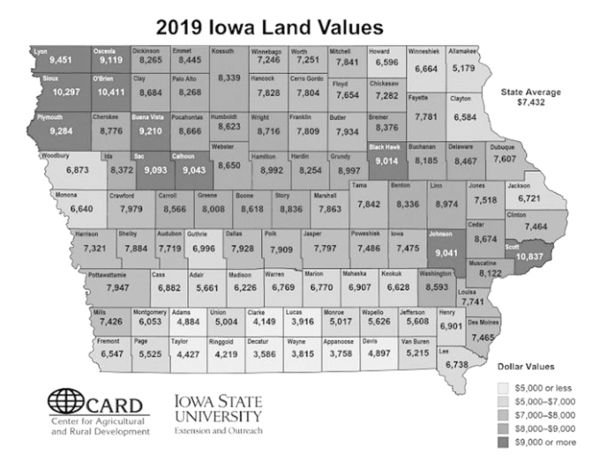 AMES - The annual Iowa State University survey shows the statewide value of an acre of farmland increased by 2.3 percent and now is estimated at $7,432.

Land in Emmet County kept its value well above that average and increased over last year. In 2018 the value per acre was $8,352 and in 2019 the value was $8,445. The numbers are in line with the four surrounding Iowa counties. The county with the highest value in the state was O'Brien County with $10,411 per acre.

Wendong Zhang conducts the survey and doesn't think it's a sign of any big upward trend. "It is an increase - which is encouraging - but I wouldn't hail this as a solid rebound of the market, " he says, "because the magnitude is still quite modest. It just exceeded the pace of inflation." That increase means an acre of farm ground is worth $168 more than the year before.

He says low commodity prices and low interest rates both helped keep the values from going up much more. Zhang, who is an assistant professor of economics, doesn't think values are dropping off either.

"All the eight districts, except for northeast Iowa, showed modest growth. Especially in central Iowa, we see some growth at a level of five percent. In general I think shows a stabilizing land market," Zhang says. Zhang says low dairy prices hurt the land values in the northeast district.

Low-quality land statewide saw an increase of 3.3% - more than the higher quality soils. Zhang says the general economy is still strong and that tens leads to more recreational demand for land and that brings up the price of the lower quality land. He says the demand for urban development help bring up the land in the central Iowa district.

Zhang says there are two things he is watching that could impact the land values in the coming year. He says one is whether we will have a trade deals and the details of those deals - while the other is whether or not the Fed Reserve cuts the interest rates again or stay with the original plan to gradually increase the interest rates. Zhang says the rate cut would be more positive news for landowners. "In general lower interest rates tend to support land values," Zhang says.

The I.S.U. Land Value Survey started in 1941. Zhang has been overseeing the survey for the last five years.