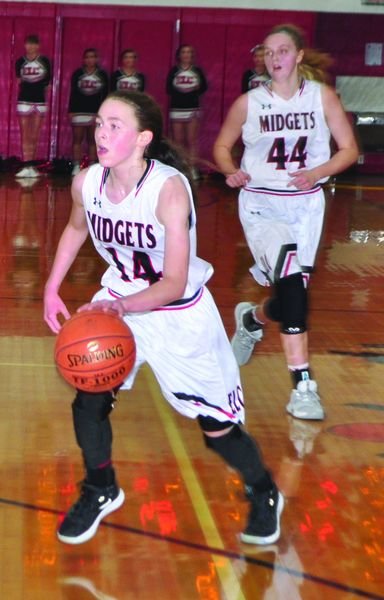 CHEROKEE - In a battle of ranked teams, Estherville Lincoln Central's Kaitlyn Tendal kept her team on pace with Class 3A No. 10 Cherokee in the first quarter.

However, the Braves pulled away with a 27-point second quarter and went to win 86-68 over the 13th-ranked Midgets.

Using constant full-court pressure, Cherokee harried ELC in a game in which fouls were prevalent on both sides.

"There was no flow to the game," said ELC coach Don Martindale. "We also didn't adjust to the way the game was being called. It's a good lesson for the team."

Tendal, who finished with 25 points, scored 16 in the first period, as the two teams were tied 20-20 after the first 8 minutes.

However, the Braves pressure produced more easy opportunities and they led 47-32 at halftime and 65-45 after three quarters.

For ELC, Jordyn Stokes finished with 10 points, Jadynn Moore had nine, Amara Heinrichs and Jaydan Nitchals each had six, Brei Christoffer and Adrienne Rosfjord each had four points, and Laura Humble and Abby Sander each had two points.

ELC (5-2 overall, 1-1 in the Lakes) is on the road Friday against rival Spirit Lake.