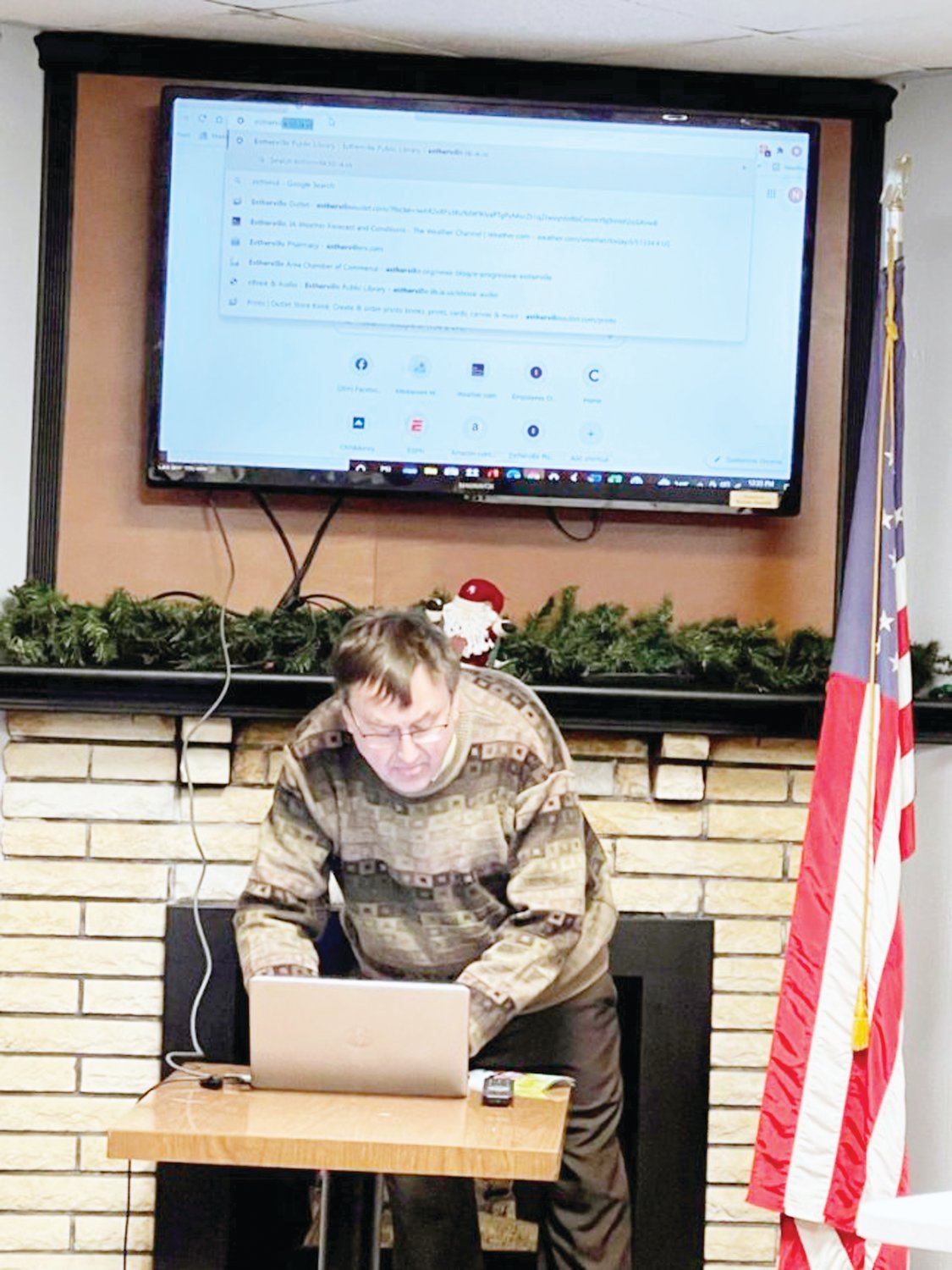 John Rudd of the Outlet Store recently showed the Estherville Rotary club the store’s addition of the photo printing kiosk. The device allows the Outlet Store to print 4x6, 5x7 and 8x10 photos in-house from images that customers upload online.
A link on the Estherville Outlet website (www.esthervilleoutlet.com) allows customers to preview the pictures from their phone or device, select the pictures they wish to print, choose a size, and preview the image to make sure making an 8x10 won’t cut off Grandma.
“Phones are very high resolution now,” Rudd said. He advised those taking family photos have the courage to step back to create space around the people in it.
“One of the sidelines of this whole thing was that our old computers were supposed to be compatible. However, when we got everything installed, we found out they were proprietary and only worked with Mitsubishi kiosks. So I had my old kiosk and put it in the basement. I had five cases of media that I tried to sell on eBay and had no takers,” Rudd said.
The pandemic supply chain issues saved the day, Rudd said.
“When I started this a year and a half ago, I didn’t think getting rid of the extra media would ever happen, but in reality, the pandemic saved me,” Rudd said.
It happened because the kiosk company had to maneuver its process due to a lack of materials.
“In August and September, we could hardly get any media. The company sent a file, I put them on a thumb drive and took them downstairs to the kiosk, and I went through four-and-a-half cases of my old media. The only downside was it took about an extra hour, and my wife didn’t want to deal with it so I did it myself on days I was there,” Rudd said.
Rudd’s print operation offers canvas prints, ornaments, and other materials through third parties. One of their partners offers photobooks, passport photos, wall decor, collages, and other options.
The partner offers 281 designs of Christmas cards that range in space from one picture up to eight pictures on a photo card.
Rudd said one older woman came in to look at Christmas cards and confessed, “It hasn’t been a good year. I haven’t had a good year. I lost my husband and another family member.”
Rudd emailed the company and created a card with eight pictures and added descriptions to explain the reason she chose each picture. It took the place of an unnaturally cheerful note or long letter.
Analysts at IBISWorld state the pandemic also increased demand for photo keepsakes, making people nostalgic for past travels and special occasions.
App and website-based services like The Outlet Store’s will grow in popularity as people socially distance and limit their time in retail outlets.
Rotarian Nancy Anderson said she used the kiosk so much, she might be in trouble one day. “It’s a great service, and a wonderful capability to have for scrapbookers, too,” Anderson said.
Customers prepay for orders over $10 to avoid someone placing a large order then never picking up their prints. Prints can be done in an hour, generally, and are available for 24 hours afterward, Rudd said.
To learn more about photo printing in Estherville, contact Rudd at the Outlet Store.