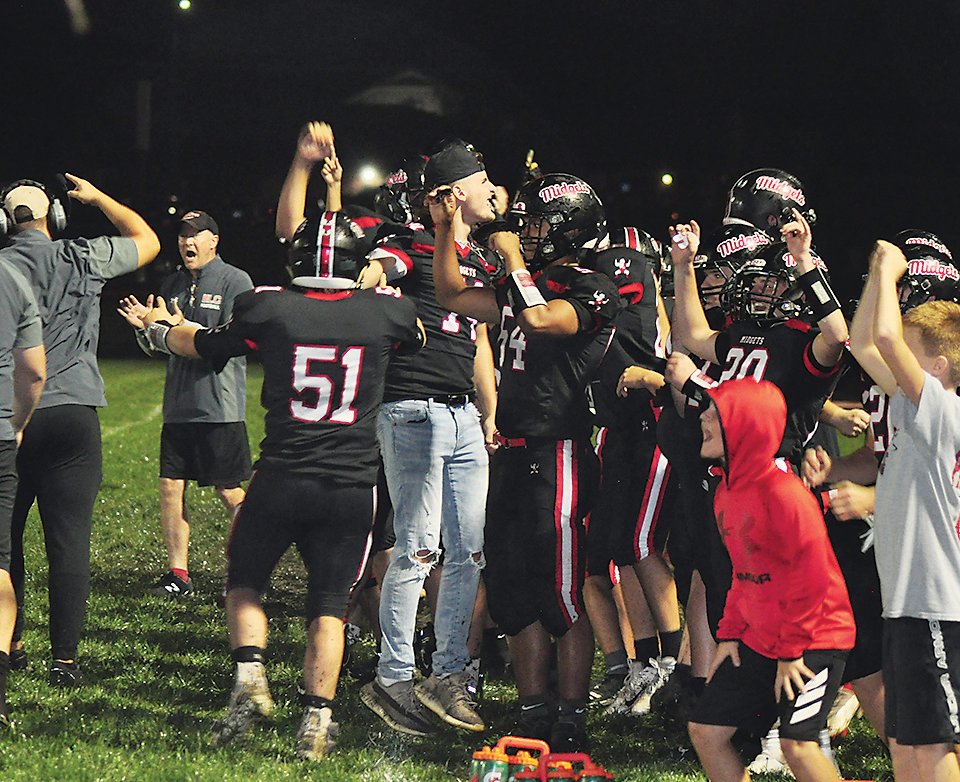 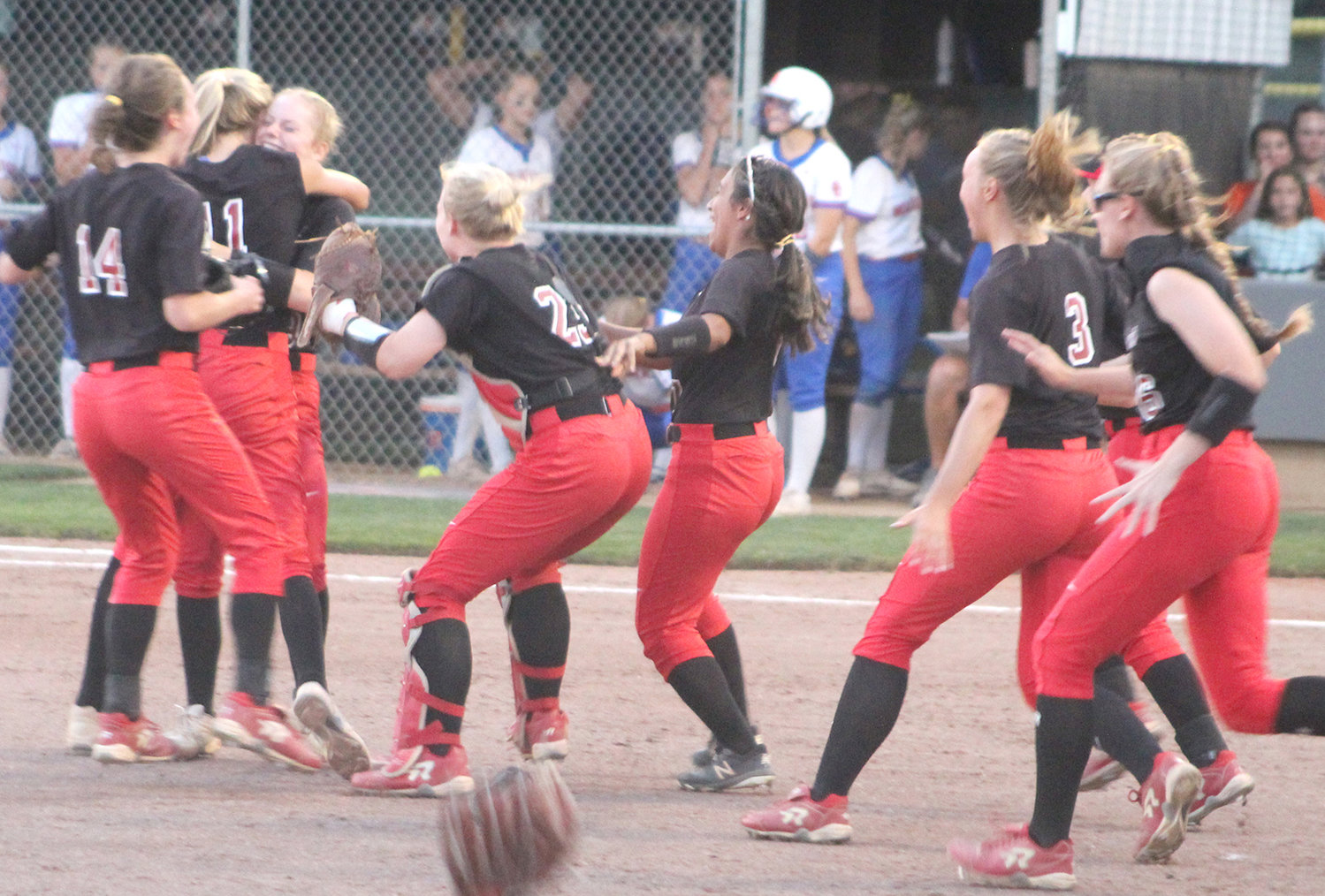 The Estherville Lincoln Central Softball Team won each of its three regional games by just one run to qualify for the 2021 State Softball Tournament.
Previous Next
Posted Friday, December 31, 2021 12:00 am
By David Swartz

With the sports schedule mostly back to normal in 2021, some incredible performances were seen throughout the year. Estherville Lincoln Central football, boys’ basketball and girls’ basketball all defeated top-ranked teams. As usual, several individuals and teams represented their respective schools in State competition. Don’t forget the Iowa Lakes Men’s Basketball Team, that represented the community college with a third-place finish at Nationals.
Below is a breakdown of some of the accomplishments from each of the sports seasons.

2020-21 Winter Sports
Two area senior wrestlers earned a trip to the 2021 State Tournament.
Estherville Lincoln Central’s Garrett Paulson went 0-2 at 170 pounds in Class 2A, finishing a successful 34-6 senior campaign.
North Union’s Trevor Kruse became the first Warrior wrestler to qualify for state. Wrestling at heavyweight in Class 1A, Kruse went 1-2 at the state tournament, coming up short of the medal round.

The Estherville Lincoln Central girls basketball team had a successful campaign, but ran into eventual state champion Unity Christian in a Class 3A Region final.
The ELC boys only had one playoff game, but it was one to remember, as the Midgets lost on a buzzer-beating 3-pointer, 61-58, to the Spencer Tigers.

The Iowa Lakes Men’s Basketball Team earned a trip to Nationals for the first time since 2013 and came away with a third-place finish. The Lakers’ the won NJCAA Div. II third-place match 90-71 over Garrett Lake. Keshawn Pegues came off the bench to lead Iowa Lakes in that game with 26 points while Coach Troy Larson notched his 300th career victory at the helm of the Lakers.

2021 Spring Sports
After skipping a year of spring sports due to the pandemic, area teams returned to the track, the tennis courts and the golf courses in 2021.
Area schools sent a host of qualifiers to the state track meet in May.
For ELC, the 4x200-meter relay team of Lamont Whiting, Matt Christensen, Seth Busch and Zack Anderson clocked a time of 1 minute, 31.01 seconds to place third in Class 2A. It was the quartet’s best time of the year and ranked second all-time in the ELC record books.
Whiting also earned an eighth-place medal in the 100-meter dash and was part of the 4x100-meter relay quartet of Daryl Jensen, Christensen and Busch, that placed 10th.
The sprint medley team of Jensen, Christensen, Busch and Anderson placed 19th at state. However, that quartet set the school record in that event earlier in the season in 1:37.42.
Also, Nick Leonard placed 10th in the 110-meter high hurdles and Parker Duitsman placed 24th in the 3200-meter run.
For the ELC girls, freshman Jasey Anderson led ELC with a fifth-place finish in the Class 2A long jump with her leap of 17 feet, 10 inches. The sprint medley quartet of Jordyn Moore, Tatum Dunlavy, Jordyn Stokes, and Anderson placed 11th. The 4x200-meter relay team of Moore, Dunlavy Stokes, and Brei Christoffer placed 14th. The 4x400-meter relay team of Dunlavy, Stokes, Moore and Anderson placed 23rd and the same quartet placed 23rd in the distance medley. Senior Kendyl Ruschy placed 22nd in the discus.
The North Union Track Teams came away from the Class 1A State Track and Field Meet with five medals. Samantha Nielsen led the Warriors, tying for second in the high jump at 5 feet, 2 inches. The North Union 4x100-meter relay team of Ella Ulrich, Naomi Jones, Shelby Fraker and Anna Longhenry finished eighth in the finals. Longhenry also earned eighth-place in the 100-meter hurdles.
For the North Union boys, Bryer Prochniak placed sixth in the 100-meter dash and eighth in the 200-meter dash. Carter Anderson finished ninth in the high jump and 20th in the 110-meter hurdles.
Graettinger-Terril/Ruthven-Ayrshire sent four events to the Class 1A State Track and Field Meet. Myla Murphy finished sixth in the 110-meter dash and ninth in the 200-meter dash. Murphy also anchored the 4x100-meter relay team of Macy Alderson, Kate Sorenson, and Lily Thompson, which placed 11th. GT/RA’s Drea McKean-Riparetti finished fourth in the high jump.

2021 Summer Sports
Two area teams, Estherville Lincoln Central and North Union, qualified for the state softball tournament.
In Class 3A, ELC won three straight one-run games just to make the state tournament. The Midgets lost both their state quarterfinal game, as well as their consolation game at state. The Midgets finished the season with a 23-9 record and return both top pitchers in Tatum Dunlavy and Rylee Yager.
North Union needed a one-run victory, 4-3, over Western Christian in the Class 2A region semifinals, but won easily, 9-1 in the region final. However, the Warriors also couldn’t pick up a win at state, losing their state quarterfinal and consolation game.. The Warriors finished the season with a 29-6 record and they return their ace pitcher Emily Meyer.
The ELC baseball team came within one game of state, losing to Unity Christian in a Class 2A Substate game. ELC wrapped up a 20-6 season.

The Estherville Lincoln Central football season was an exciting one, as the Midgets were ranked in the Top 10 all season in Class 2A. In Week 2, the Midgets defeated then top-ranked West Lyon. While that put ELC at the No. 1 spot in the rankings, the Midgets then lost to Humboldt. ELC finished third in the district standings to make the playoffs. However, the Midgets lost to Central Lyon/George-Little Rock for the second straight year as the season came to an end.
Graettinger-Terril/Ruthven-Ayrshire made the Class 8-Player playoffs after an 7-1 regular season record. The Titans defeated Gladbrook-Reinbeck 58-28 in the first round, but lost to Don Bosco 54-20 in the second round.

2021-22 Winter Sports
The Estherville Lincoln Central Girls and Boys basketball teams are off to great starts for the 2021-22 season. The girls are 10-0 on the season and ranked fourth in Class 3A. A key victory in the first half of the season was defeating three-time defending Class 1A champion Newell-Fonda 67-62. All other wins have been by double digits.
The ELC boys are 7-1 on the season and are ranked third in Class 3A. The Midgets’ defeated Class 2A top-ranked Western Christian, 82-74—the first win over the Wolfpack since they joined the Lakes Conference in the 1997-98 season. (Previous to that event, Estherville defeated Western Christian in the 1986 season).

Passing the 1,000-point milestone at ELC

Warriors struggle against No. 7 Bulldogs