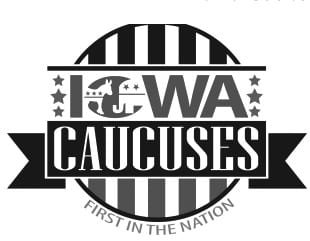 In Iowa's caucuses, the process is more involved than showing your ID to election officials, stepping into a voting booth, and marking the spot or pulling the lever.

The word "caucus" comes from a word in the dialect of the Algonquin tribe roughly translated to English as cau'cauas'u, meaning "one who advises, urges or encourages, or to talk to, give counsel, promote, incite to action, according to linguistics experts.

The caucus is a neighborhood meeting of sorts that attracts mostly the most politically-active, like-minded people in a community. Iowans are asked to sacrifice an hour or more of an evening to the caucus process, and it requires the courage to put a public face on your support of a candidate.

On the Democratic side, Iowa's caucuses are much more out in the open everyone in your precinct knows whom a voter supports, and if they spoke, possibly why. The winners at the precinct level are often the ones who have the most passionate supporters, according to the Iowa Secretary of State.

The Iowa caucuses will begin at 7 p.m. February 3 at more than 1,000 locations across the state. There are 44 delegates to the national convention that can be earned in the process, and that string of county and statewide conventions lasts for months, which is one reason Iowa has their caucus so early. Iowa will also have superdelegates who don't have to go through the complex selection process; they can vote for whomever they wish at the convention.

For those considering attending the caucus, but unsure of what it will be like, Election Commissioners have set out these steps:

2. A caucus chair and secretary are elected. This can be anyone willing to facilitate the caucus process, or to record the results.

3. This is the promoting and inciting part: supporters make the cause for their candidates.

4. Vote with your feet. Everyone in the precinct room separates into parts of the room for their candidates of choice.

5. The chair adds up how many supporters are in each cluster.

6. Each candidate must draw 15 percent of attendees to remain viable. If 100 people are in the room and 14 or fewer say they're voting for a particular candidate, the candidate will receive zero delegates out of that precinct.

8. This re-caucusing continues until all remaining candidates are viable, and then the numbers are tallied. Caucus chairs send results in using an app.

9. The precinct selects delegates and alternates to the county convention.

10. A business meeting commences to elect participants to committees and introduce platform resolutions. This part is usually brief and often brings out positions on issues most caucus goers likely have in common.

11 The precinct caucuses produce 11,065 delegates who are filtered to 44 national convention delegates through county conventions in March, congressional districts in April, and the state convention in June.

The 2020 caucuses will bring a few changes in procedure. Iowa caucusgoers may be accustomed to precinct captains from various candidates trying to persuade supporters of rival candidates to join their preference group throughout the first round. In 2020, once a candidate has enough supporters to be viable, those supporters are locked in to that candidate. Those supporters have a choice to stay, or to leave a signed preference card and leave the caucus room. Another change is online sign up for caucusing. Those who have signed in early may skip the registration line and go right in. An addition, making the caucus accessible to more Iowa voters, is satellite caucus locations. There are satellite locations in Arizona and Florida, serving winter snowbirds, and there are closed satellite caucuses. In Emmet County, Valley Vue Care Center in Armstrong is a closed satellite caucus set up for the care center's residents.

The caucus site for most voters in Wallingford, Estherville, Dolliver and Gruver is Iowa Lakes Community College. There are also locations in Armstrong and Ringsted. Voters can find their caucus sites at iwillvote.com/locate.

One change for 2020 is that caucus-goers who back viable candidates on the first ballot the groups with 15 percent or more of the vote can no longer change their choice on the second round. Only voters in the non-viable groups can change their minds.

Iowa election officials say this could present a tighter race between the viable candidates before a winner can be declared.

Another 2020 change is that caucus chairs will now report the number of supporters in each precinct who back each candidate in the first round. This provides more security of numbers. Another side-effect of this rule is that a winner will be declared not only from the traditional, complex system of state delegate equivalents, but also from the raw totals of the first, second and final alignment at the precinct level. One candidate could sweep them all, but it's also possible a different candidate could win each metric and three candidates could declare themselves the winner.

The change makes rural precincts like those in Emmet County make more of a difference because campaigns can now only run up a score to a certain extent in the densely populated cities and suburbs.

After all the effort and hype, Iowa's delegates to the national convention represent about two percent of the delegates required to become the Democratic nominee.

Iowa represents momentum for the candidates, but with the new rules it could be less clear who will achieve that momentum into the New Hampshire primary, other early states, and Super Tuesday in March, according to the Iowa Democratic party.

An analysis of elections over the last 40 years has shown that Iowa doesn't necessarily decide who will be president, but it does play a strong role in deciding who won't. Many candidates over the years have dropped out after a poor showing in Iowa. Aside from Bill Clinton, who in 1992 won neither Iowa nor New Hampshire, candidates who skip campaigning here in favor of New Hampshire and South Carolina have never recovered from having no showing in Iowa.